On the morning of June 8, on behalf of the city leader, Deputy Secretary of the City Party Committee Nguyen Van Quang chaired a meeting with the delegation of Quang Ninh province led by Deputy Secretary of the Provincial Party Committee Ngo Hoang Ngan promoting tourism connection between Da Nang and Quang Ninh province. Attending the meeting were Mr. Le Trung Chinh, Vice Chairman of the Da Nang City People’s Committee.

As two localities share numerous similarities in terms of tourism development, over the years, Da Nang and Quang Ninh have had plenty of exciting activities and unique tourism products that have strongly attracted domestic and international tourists. Recently, similar to other localities, the tourism industry of Da Nang and Quang Ninh have been severely affected by the Covid-19 pandemic. Therefore, immediately after controlling the epidemic, they have embarked on restoration of business production and economic development. 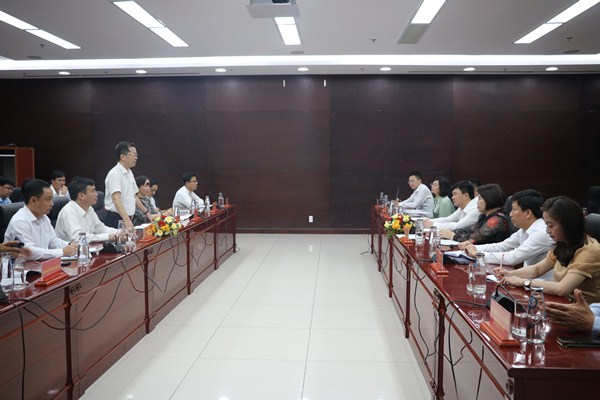 At this meeting, both sides agreed to work together and discuss measures to promote domestic market on the basis of endorsing the advantages of each locality and tourism infrastructure such as sea ports sea, airport, landscape, culture, society …

Thanks to unique tourism products and synchronous development infrastructure, in 2019 Quang Ninh attracts 14 million visitors, including 5.8 million foreign visitors (most of which are from China). In Da Nang last year there were also over 9 million tourists, contributing 25% of the city’s GDP.

Also within the meeting, leaders of the two localities discussed over the orientation, management experience, professional tourism, mutual support in communication, organizing activities and events to promote cultural and tourist exchanges between localities.

The issue that the two localities concerns is the recovery of Da Nang-Quang Ninh flight route at Van Don International Airport to connect Quang Ninh with tourists-generating destinations including Da Nang, Quang Nam and Thua Thien Hue. Mrs. Truong Thi Hong Hanh, Director of Da Nang Department of Tourism, proposed that the Da Nang-Van Don route should be restored as soon as possible and raises the frequency of flights from 3 flights / week to daily with discounted prices along with policies such as booking series (pre-purchase some seats on the plane), discount tickets for arrivals and departures at Van Don airport. She also stressed the linkage of Da Nang – Quang Ninh – Nha Trang, and proposed the Government for the pilot mechanism to attract cruises and proceed card payment for tourists visiting these localities to increase the solvency and also manage shopping transactions …

Deputy Secretary of the Provincial Party Committee Ngo Hoang Ngan also stated that even though the last few years have seen significant tourism development, there still needs to get more experiences in tourism environment management, development and improvement in tourism products quality, tourism promotion and training… of well-developed destination like Da Nang. With the common goal of further boosting tourism, Da Nang – Quang Ninh will carry out tourism collaboration and promotion to further employing its strengths and advantages.

In the afternoon the same day, the delegations and businesses from Quang Ninh will organize tourism stimulus programme in Da Nang with the attendance of Quang Ninh tourism businesses.