After eleven months of racing the world’s oceans, the Da Nang – Viet Nam team was greeted by thousands of spectators along the banks of London’s Thames River on 30 July as it celebrated finishing the tenth editionof the Clipper Round the World Yacht Race. 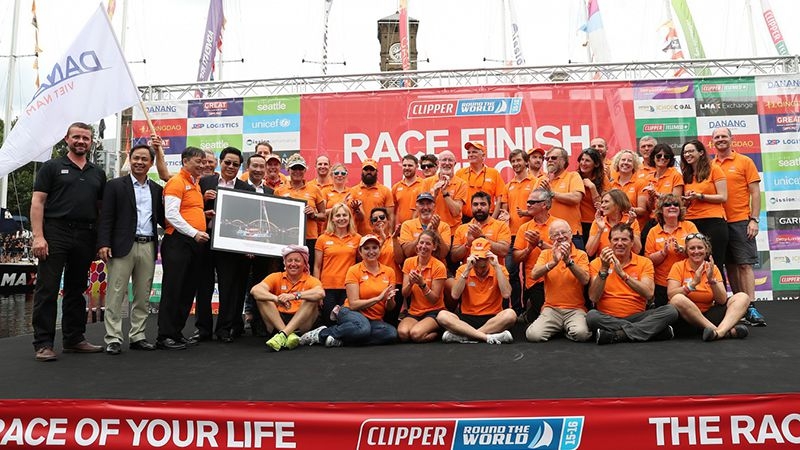 Da Nang – Viet Nam finished in a highly respectable seventh place out of the twelve teams overall and enjoyed two podium finishes during the eleven month long journey, which included a memorable first place victory in the race into Hobart, Australia, and third place in the penultimate race of the competition just ten days ago.

Arriving back to London, where the teams departed eleven months ago, Skipper Wendy Tuck, 50, who was adopted by the people of Da Nang when the fleet visited the city, said: “It was very emotional coming up the River Thames in London this morning reflecting on everything we have been through the last 11 months. I am so proud of my team. They started as novices and now should be proud of what they have accomplished, tackling the worst conditions Mother Nature could throw up.

“We have experienced everything from hurricanes and a dramatic Pacific Ocean storm which knocked our yacht down in the Pacific and meant we had to limp into Seattle. I have never seen conditions like it and hope to never again. Everyone really rallied together then to repair the boat and help people who were injured. Everyone stayed really calm and I couldn’t have asked for more as a Skipper,” added Wendy.

About the support shown by the team’s Vietnamese sponsors, Wendy said: “The city of Da Nang has been with us every step of the way. We felt their support from the start, and the stopover there was such an incredible highlight for all of us. It was my first time visiting Da Nang but they have impressed me a huge amount and I’m looking forward to returning for a holiday. Thanks to the city and the people of Vietnam for following us and for believing in us. It made a huge difference.”

Mr. Dang Viet Dung, Vice Chairman of Da Nang People’s Committee was one of the delegation in London, and said: “I’m very happy to be here at St Katharine Docks today and see some old friends. On behalf of the Da Nang government and people, may I congratulate all the teams, especially team Da Nang-Viet Nam on completing 40,000 mile Clipper 2015-16 Race.

“Despite not being the champion of the race, to us, you are the winners because you sailed the yacht named Da Nang-Viet Nam, bringing the image of the beautiful and hospital coastal city of Da Nang to friends around the world. We are very proud of the bravery and endless efforts of Skipper Wendy Tuck and the whole team. Once again, congratulate and thank team Da Nang-Viet Nam!”

The fast growing coastal Vietnamese destination was a first-time Team Sponsor in this year’s Clipper Race, aiming to use the high profile of the eventas a platform for boosting international trade, investment, economic impact and tourism, along with enhanced social, cultural and diplomatic relations.

Da Nang also joined iconic race destinations such as Sydney, Rio de Janeiro, Cape Town, and New York when it hosted the entire Clipper Race fleet and its international crew members and supporters in February this year. The city impressed hugely with its friendly and hospitable culture, stunning sandy coastline and a dazzling night parade featuring the home team yacht which bought huge crowds of people out to line the Han River.

Over 40,000 nautical miles long the Clipper Race, which started and finished in St Katharine Docks, is the longest, toughest ocean race on the planet and the only event of its kind which trains amateur crew to become ocean racers. 40 per cent of crew had no previous sailing experience before signing up, and only the Skipper on board is professional.

Throughout their almost year-long journey, the teams encountered the varying extremes of Mother Nature. From tropical storms and hurricane force winds, to searing heat and chilly conditions, the crew have sailed under clear starry nights, and witnessed the most incredible sunsets and sighted wildlife in some of the planet’s most remote locations.

The Clipper Race was founded by legendary sailor Sir Robin Knox-Johnston, the first man to sail solo, non-stop round the world in 1968-69, to allow anyone, regardless of previous sailing experience the chance to experience the thrill of ocean racing.

“This has been extremely tough. The conditions encountered in the Pacific Ocean after the teams left Qingdao were the worst we’ve seen in 20 years of running the race. I am proud of all of the crew; they have taken on all the world’s most challenging oceans and have been very resilient. They should be justly proud of themselves – whether crossing a single ocean or circumnavigating the entire planet. It is a remarkable achievement. The novices who set out eleven months ago have returned as seasoned sailors.”

Held biennially, the next edition of the Clipper Race will start in Summer 2017.