Vietnam has been well-known for having a back-bone of countless rivers venturing from North to South, crisscrossing many cities on the way: the mighty Red River or Hong River (whose name comes from the silt rich in iron dioxide it carries) like a scarlet silky stripe hangs over Hanoi capital; the calm and gentle Perfume River – known as the muse of Hue Old Citadel; or Saigon river wrapping itself around Ho Chi Minh city, lending its unique charm to the most vibrant city in the country.

Joining the rank of these famous bridges, Han river of Danang has its own unique lasting impression. The river has gone through thick and thin with locals and the city history, being the witness to its refreshing changes into a young and dynamic hub as it is to-date. 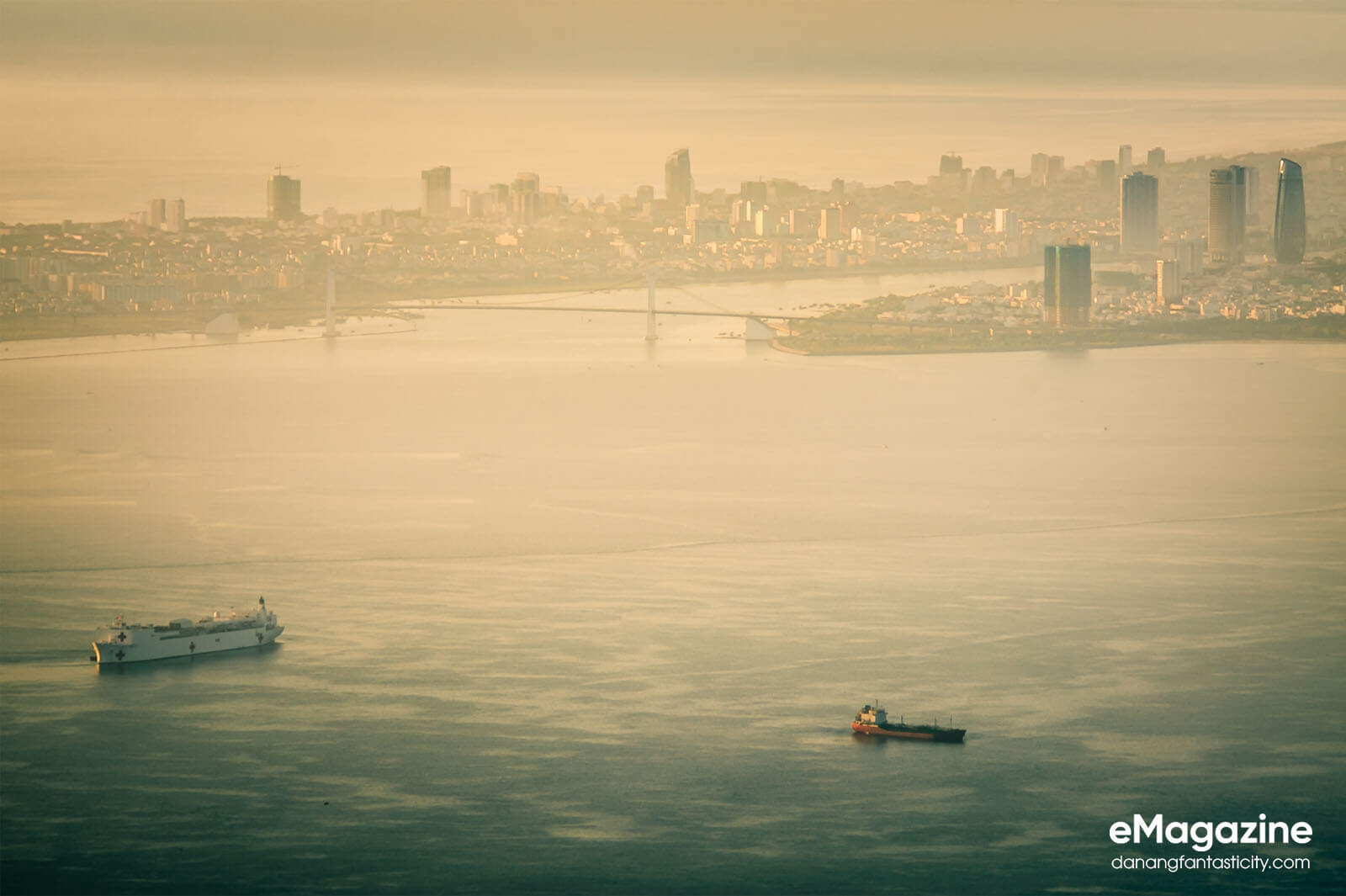 Emerging upon this history witness are 6 bridges joining the two banks of Han river. These bridges – with each one being a milestone to the city’s growth and prosperity, are scattered over a 7.2 km distance from the water junction between Cam Le ward, Hai Chau ward and Ngu Hanh son ward, to Han river Watergate and Danang Bay.

It is also these milestones that made a new brand for the coastal urban city: “Danang – city of bridges”

Tien Son bridge is the first one to be constructed over Han river. The opening took place in 2014, playing a crucial role in Danang urban and outskirts area.

Tien Son bridge is the last bridge of East-West Economic Corridor. By joining the furthest point of Tien Sa port in Son Tra Peninsula, it has connected completely the East and West wings of Danang, enabling easy logistics of goods and merchandise throughout the city, boosting growth and development.

The bridge used to be the railway bridge built during the French colonization, now has been re-erected and put into operations in 2013. Its architecture is considered to be of utmost uniqueness and is one of its kind in Vietnam.

With the impressive inclined pylon reaching 145-meter-high and the backward stay cable forming a twisted fan (yet to many it resembles the opening sail towards the East sea), the bridge is the symbol of Danang’s originality, modern life and ambition.

Despite being the ‘Cinderella’ among other newer neighbors, Nguyen Van Troi bridge is still being appreciated and conserved as the ‘treasure upon Han river’ for its original and spectacular design. The bridge is now young folks’ new choice to admire the city at night and thus becoming another must-see check-in spot in Danang. 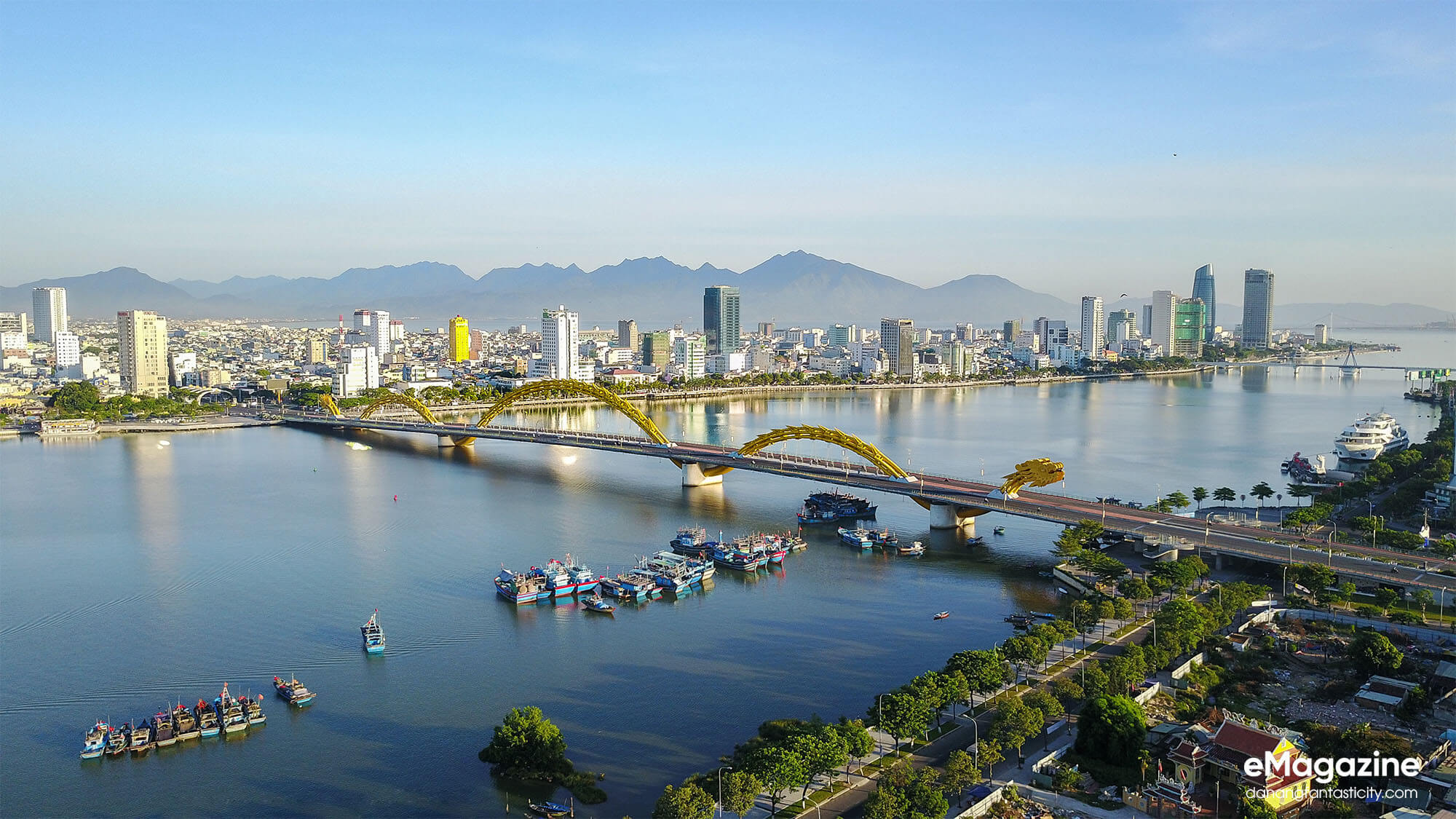 1km from these two bridges is the famed Dragon bridge, situated right in the middle of the city. The ‘record-holder’ bridge was inspired by the dragon figures during Ly Dynasty, built to convey the message of prosperity and growth out to the East sea and beyond.

The architecture of Dragon bridge has won countless titles from renowned award announcements, at the moment being the Guinness record-holder of ‘the longest steel dragon’ and being recognized as ‘the most unique and original bridge architecture in Vietnam’.

Dragon bridge originality is featured every weekend during a spectacular show where tourists get to see mighty Dragon breath stunning fire and water on the background of magical colorful lightings. 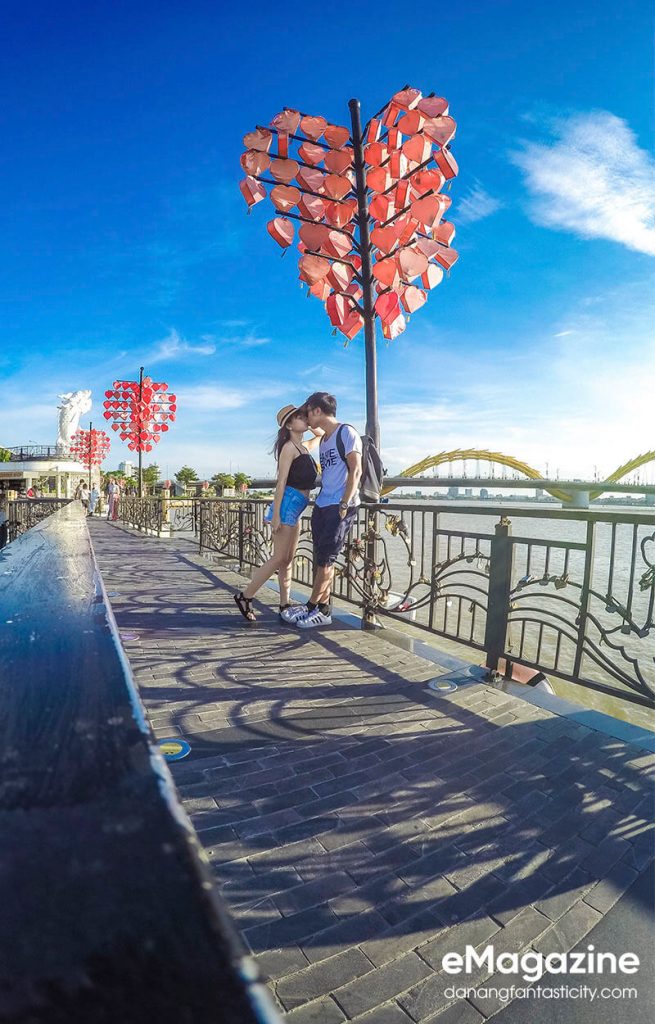 Although it doesn’t span Han river, ‘Love lock bridge’ or Love bridge (together with The Carp transforming to a Dragon, two works in the clusters DHC – Marina which belongs to the project “Marina and water sports club”) is the new dating spot for young people and tourists by its romantic charm and favorable position on Danang tourist map. 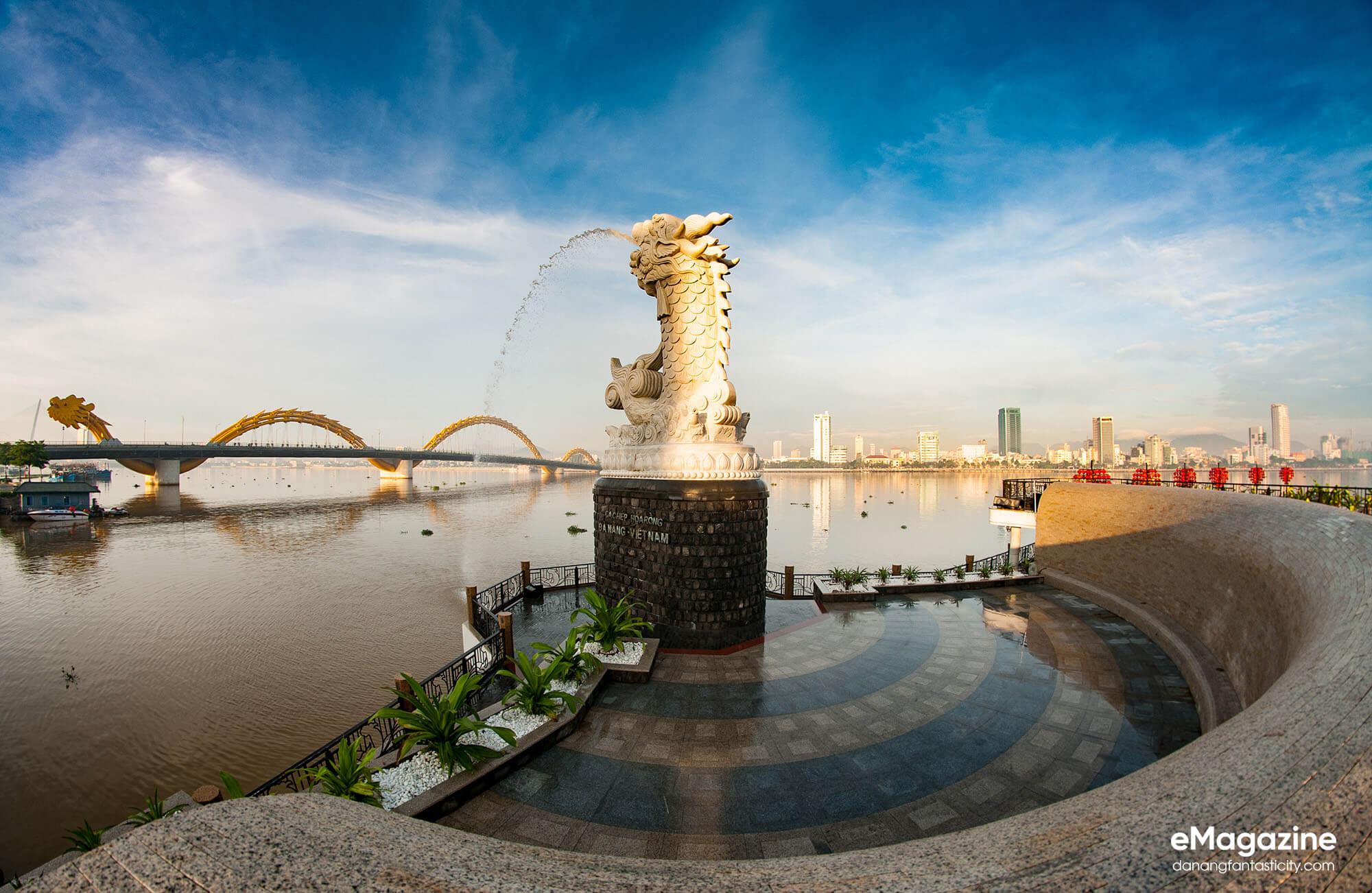 Following the current up North, Han river bridge puts on its own unique design. The bridge was once associated by its swing feature. This is the one-of-a-kind bridge in the whole country to swing on it axis a full 90-angle degree. 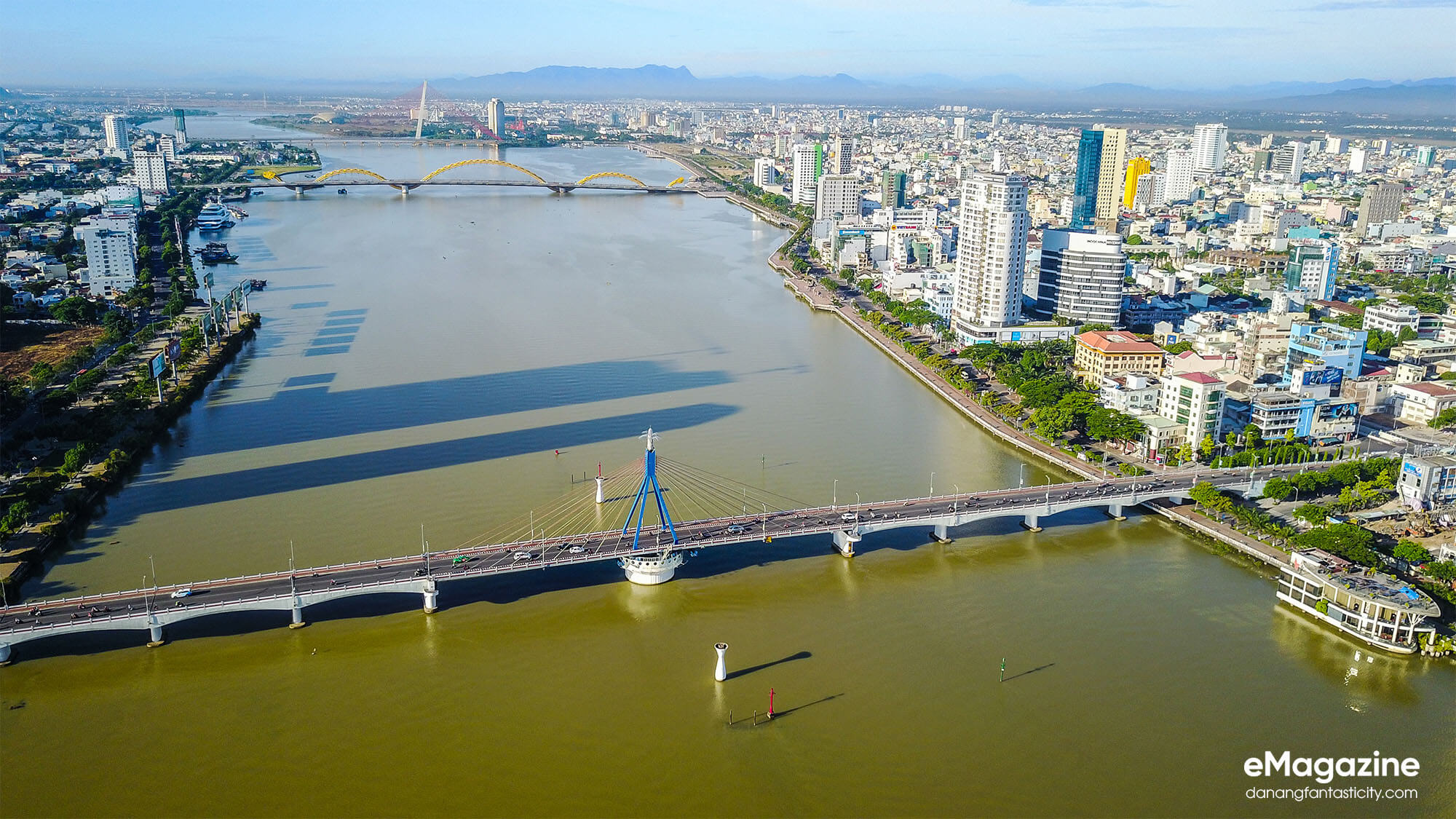 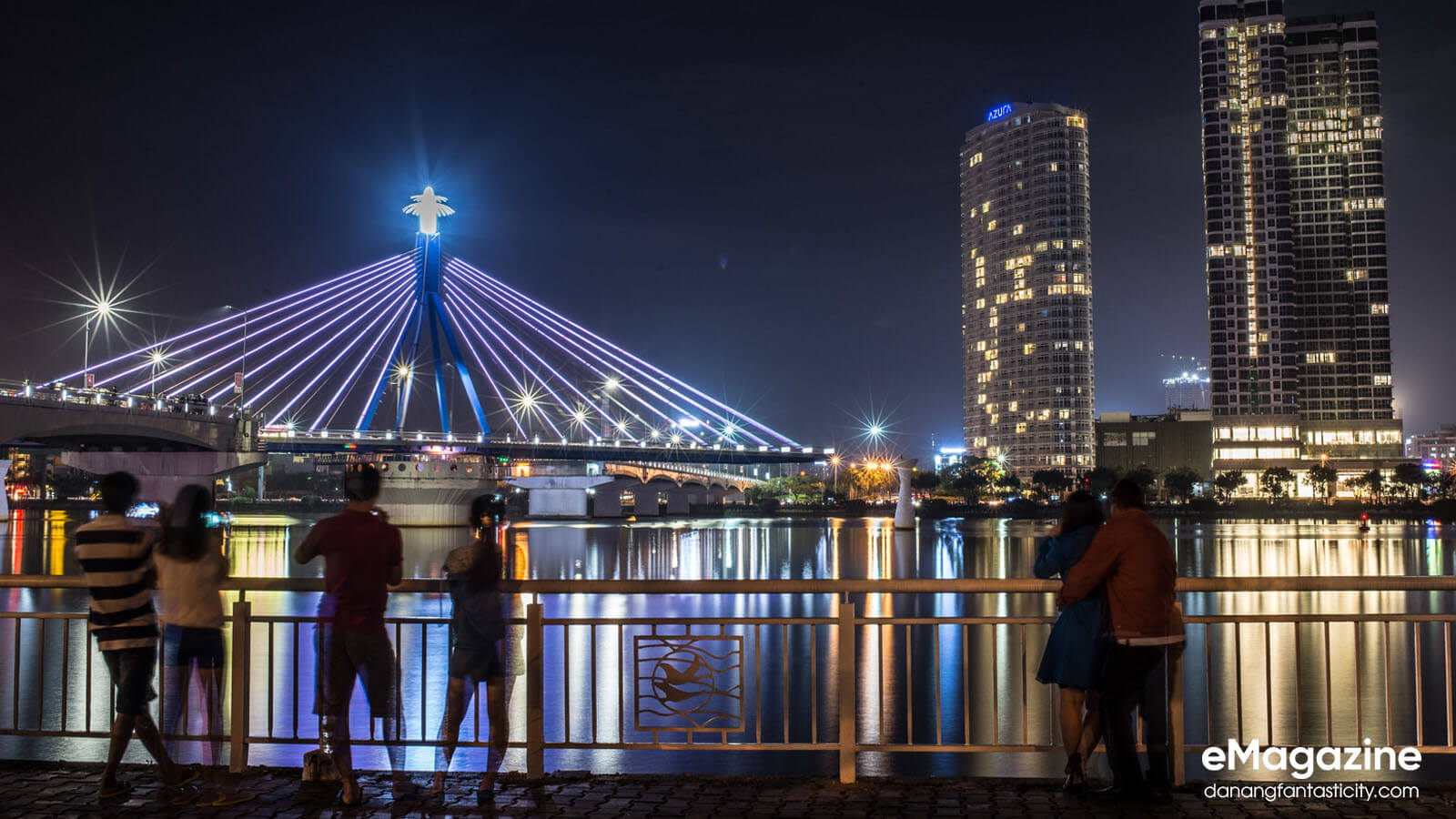 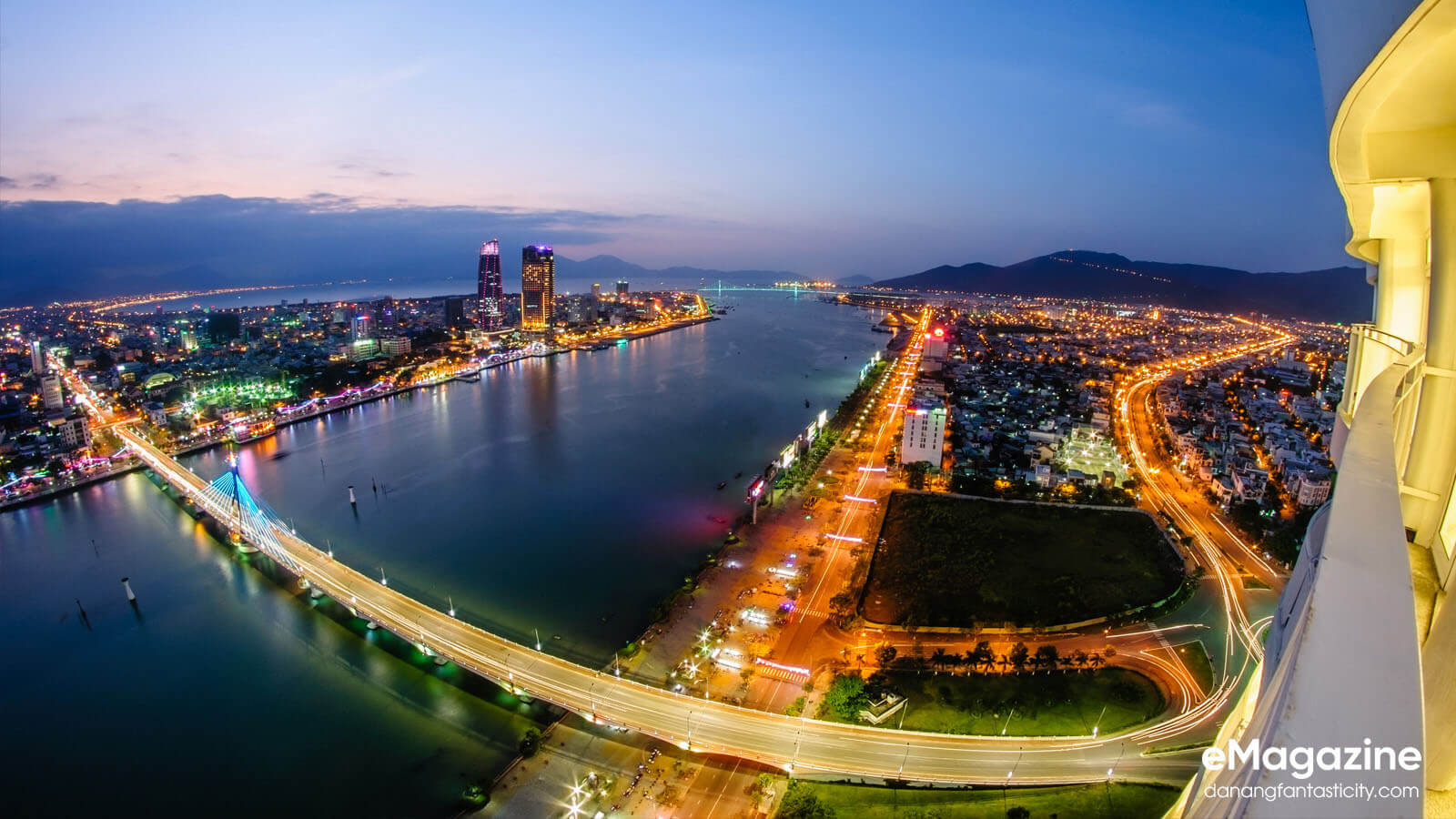 Exclusively, its construction is also the first to be partly funded by Danang locals’ contribution. Therefore, in addition to Marble Mountains, the swing bridge has been chosen as the symbol of Danang city for years on end. 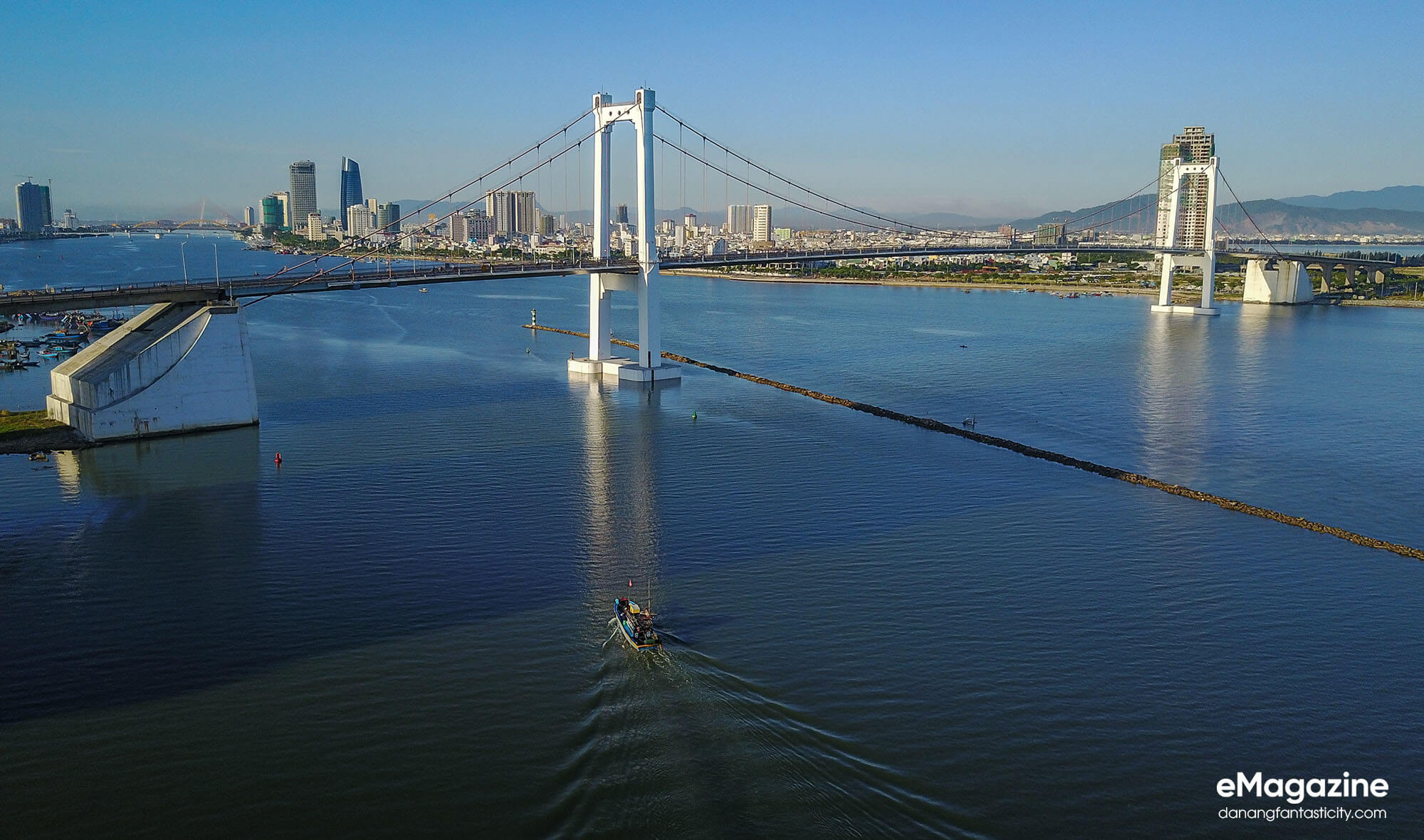 Last but not least, the final subtle touch on the lower Han river is Thuan Phuoc suspension bridge. Being the longest of its kind in Vietnam, the bridge was built in 2003 and inaugurated in 2009, linking the banks of Hai Chau ward and Son Tra ward. Thuan Phuoc bridge has the best bird-eye view to the city as well as over Danang bay. 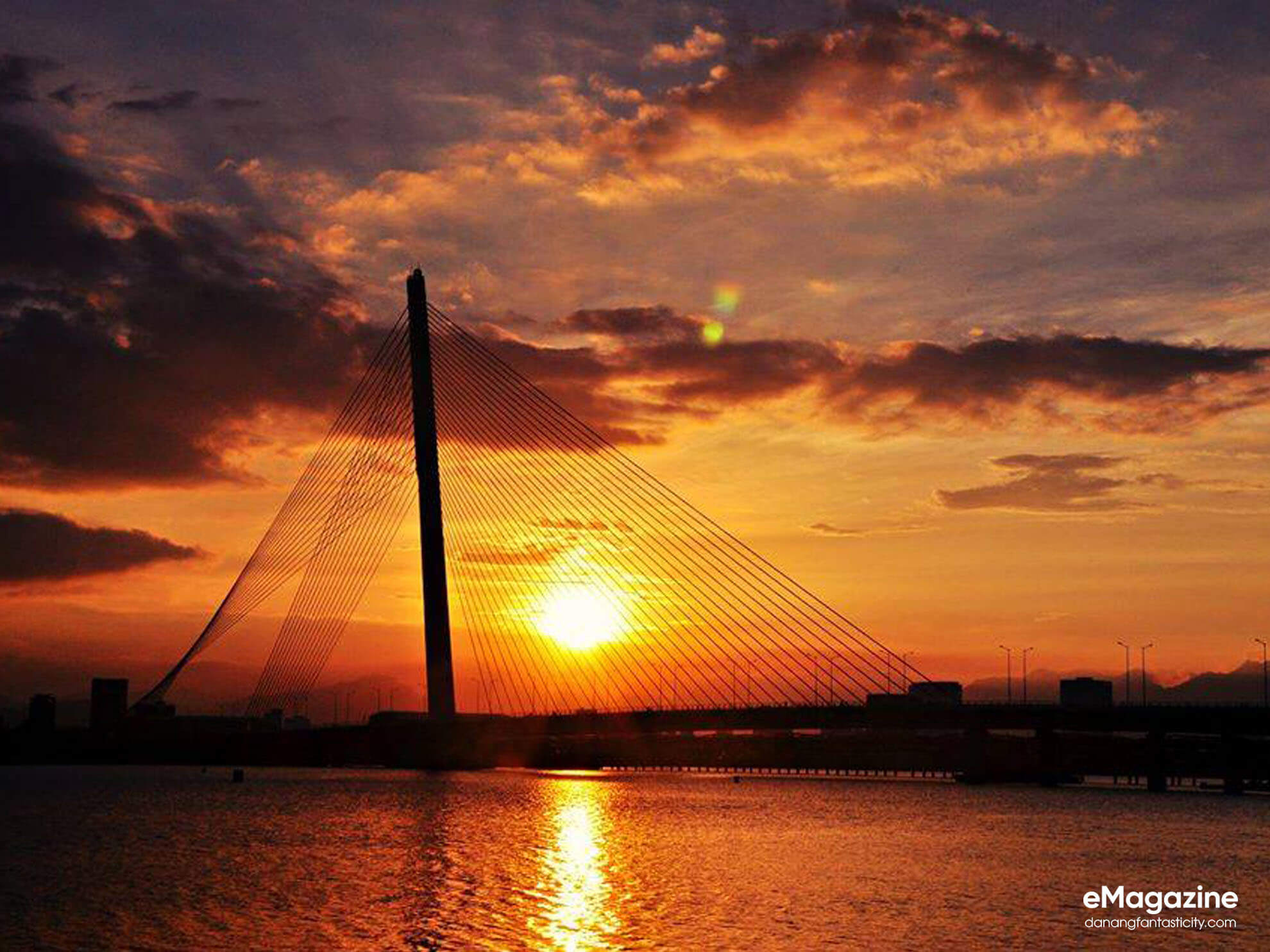 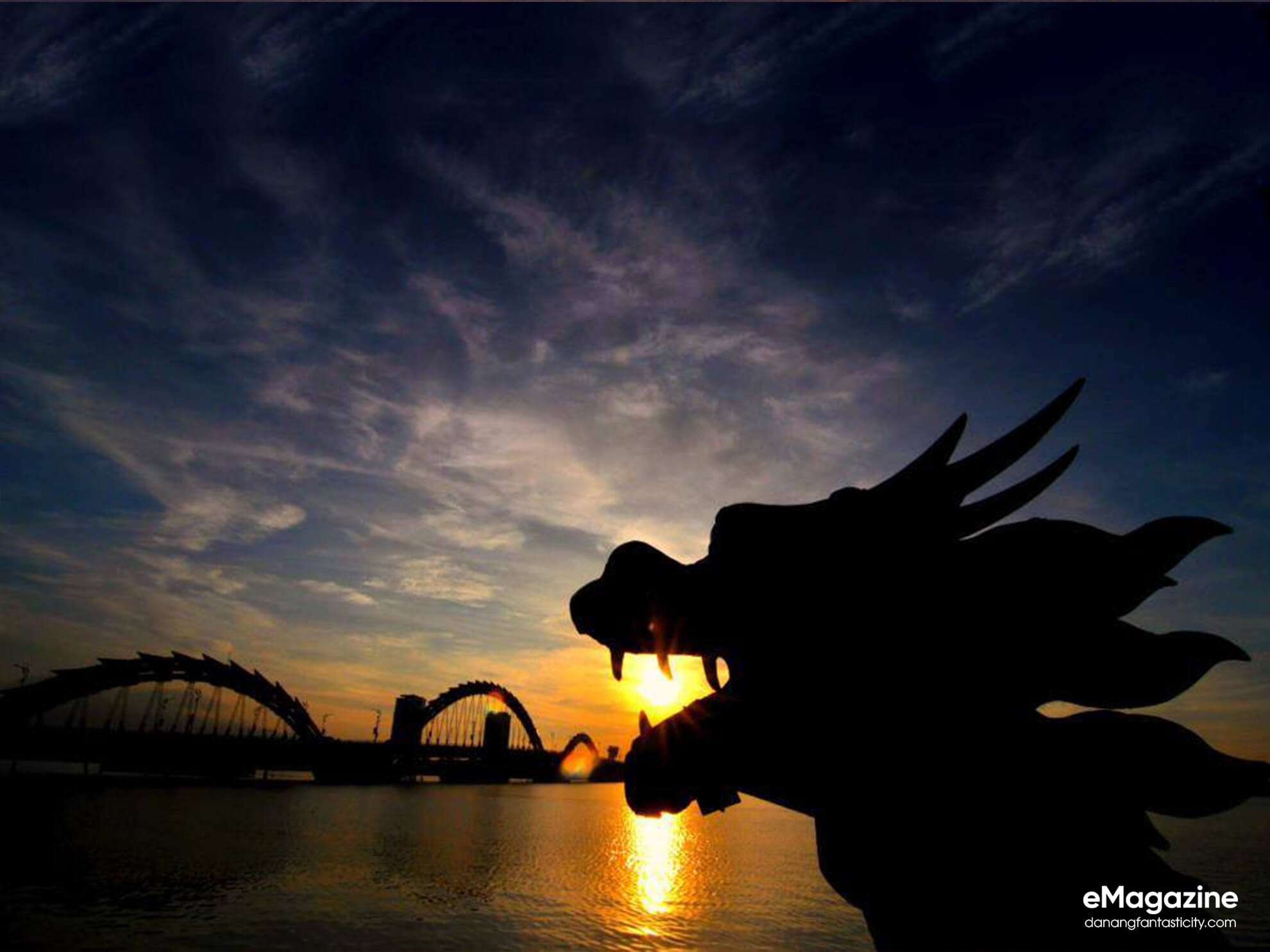 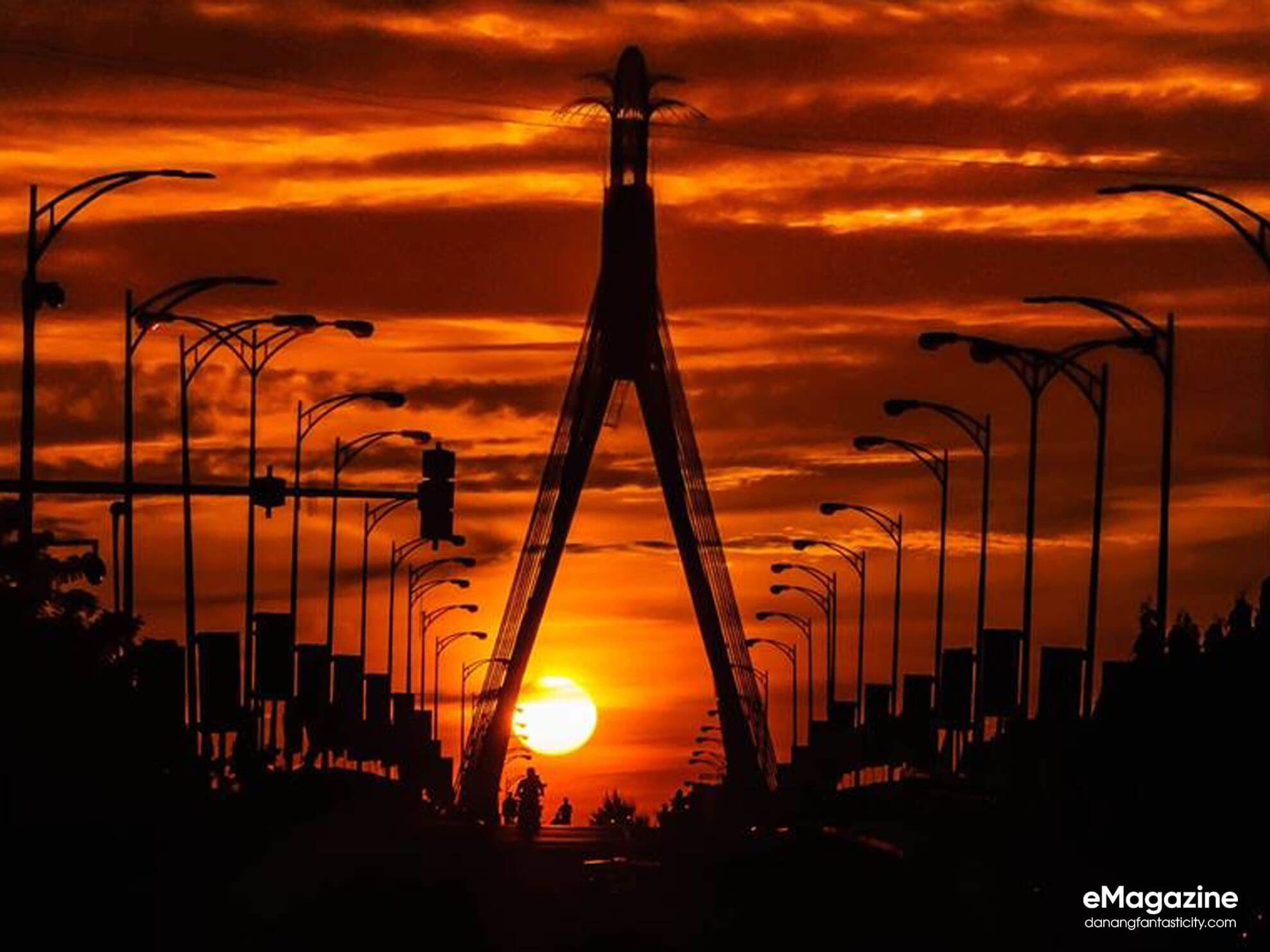 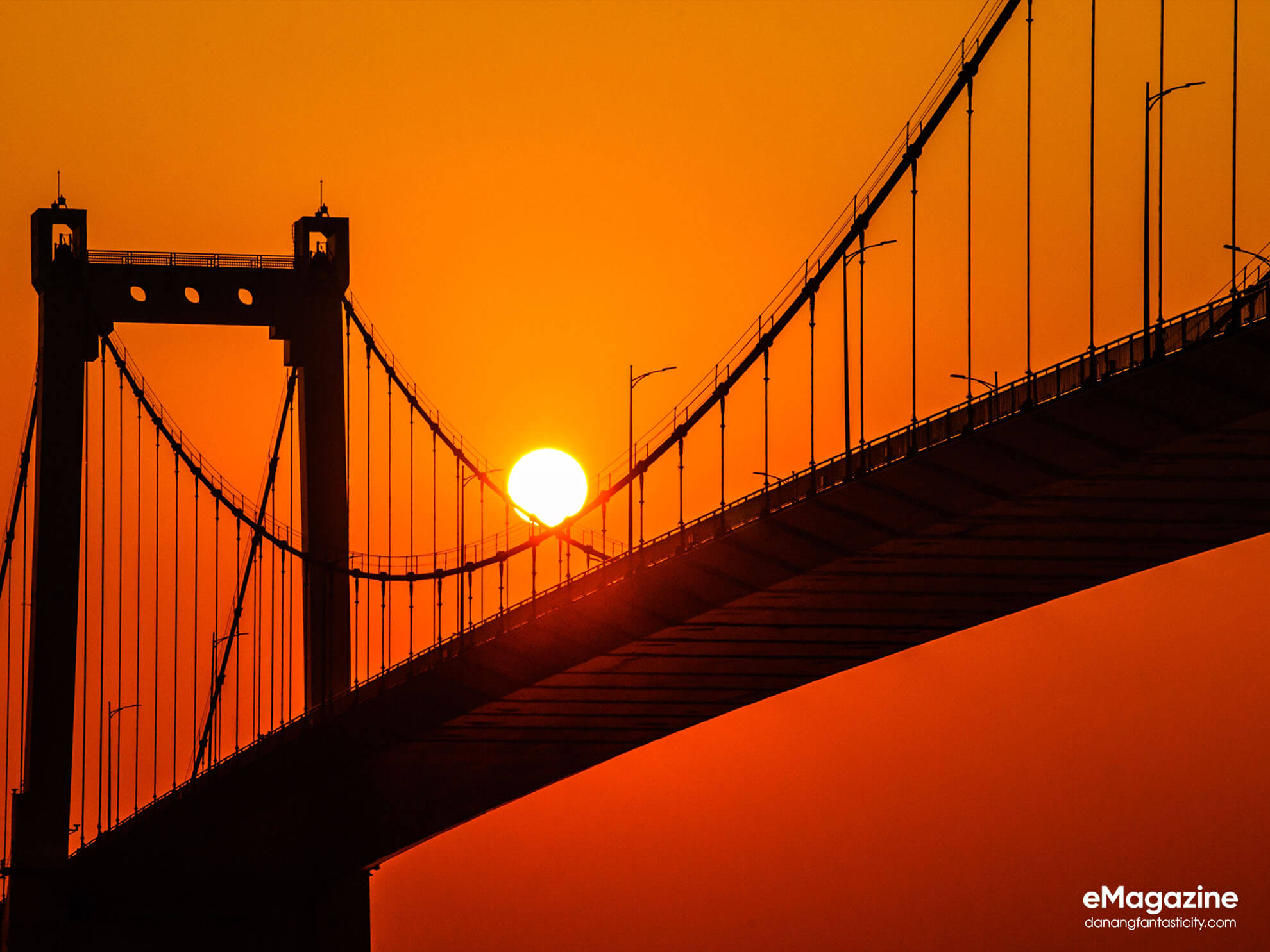 All these stunning bridges share one same special feature: they are all great places to admire the mesmerizing sky of Danang, either at sunrise or sunset. It is probably also due to this perfect setting that these spanning bridges of Han river are home to the best pictures of Danang city, with thousands of amazing photos depicting the beauty of “City of bridges”.