Located at the bottom of Hai Van Pass where Cu De river meets the sea is an area called Nam O. The name originates from its position at the south of the old administrative division “chau O”. Thanks to its terrain with the mountain and the sea, Nam O has spectacular natural landscape with beaches, reefs, rock banks… Moreover, this place is famous for specialties such as Nam O fish sauce, “goi ca trich” (spring rolls with raw herring fish and vegetables), and seaweeds… 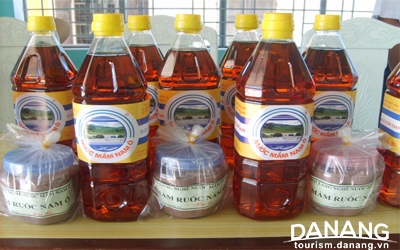 Nam O fish sauce made from the anchovy is a famous specialty in Danang. The anchovy preserved in salt from March to January (Lunar Calendar) can be extracted to fish sauce. Ca Na salt, a raw salt with big grains which has been kept for a few years to remove the acridity, is used to preserve the fish. Conforming to the traditional production, Nam Ô fish sauce is tasty, sweet-smelling and high of proteins.

Even with its special taste and certification from Intellectual Property Agency, Nam Ô fish sauce has not been developed enough to compete with other branches. The model of co-operative production to associate households is currently operated to maintain and develop this traditional trade. 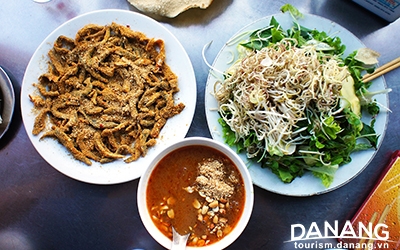 Many kinds of fresh fish caught from the sea can be used to make “goi ca” but the herring is preferable because of its small size, sweetness and tightness. Fresh herrings are cut off head, tail and belly then cut up into small pieces. After 10 minute dipped in the mixture including fish sauce, vinegar and much ginger, galingale, chilly, garlic…, the fish meat is pressed to dry and mixed with “thinh”. Made from the fine round roasted rice or corn, “thinh” add a good smell and buttery taste into “goi ca trich”. The water squeezed from fish is not removed but added with ground peanut to make a thick sauce.

The special thing of “goi ca trich” is wide vegetables used with such as “la tram”, “tim lan”, “gianh gianh”, “dinh lang”, “rau sinh”, guava shoot… Rolling the prepared herring with wild vegetables and dipping into the thick sauce is the way we enjoy the unique specialty of the coastal area Nam O, Danang.

Da Nang On Summer Days: The Ideal Stopover For All Tourists

THE MUSEUM OF THE PARACEL ISLANDS

Cá Nóc Café Danang: It’s not a SHOP but a HOME 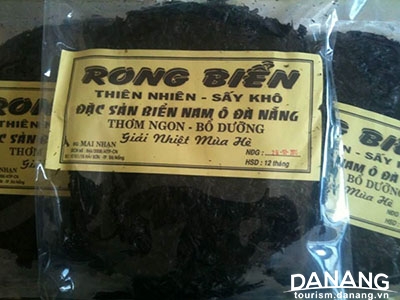 Nam O seaweed is the porphyra seaweed that strongly grows at the seashore with reefs and rock edges. It is quite mysterious that the more sloping, dangerous rock edges are, the stronger seaweed grows. Therefore, seaweed harvest is a really hard work.

Seaweed harvest is between of fall and winter. People go along rock banks to seaweed fields in the early morning. At that time, the tide ebbs away, leaving behind fresh seaweed on rock. People cut and collect to harvest the seaweed.

Being rich in nutrition, the seaweed is considered as a precious resource that Mother Nature gives Nam O.

Cá Nóc Café Danang: It’s not a SHOP but a HOME

Cá Nóc Café: It’s not a SHOP but a HOME