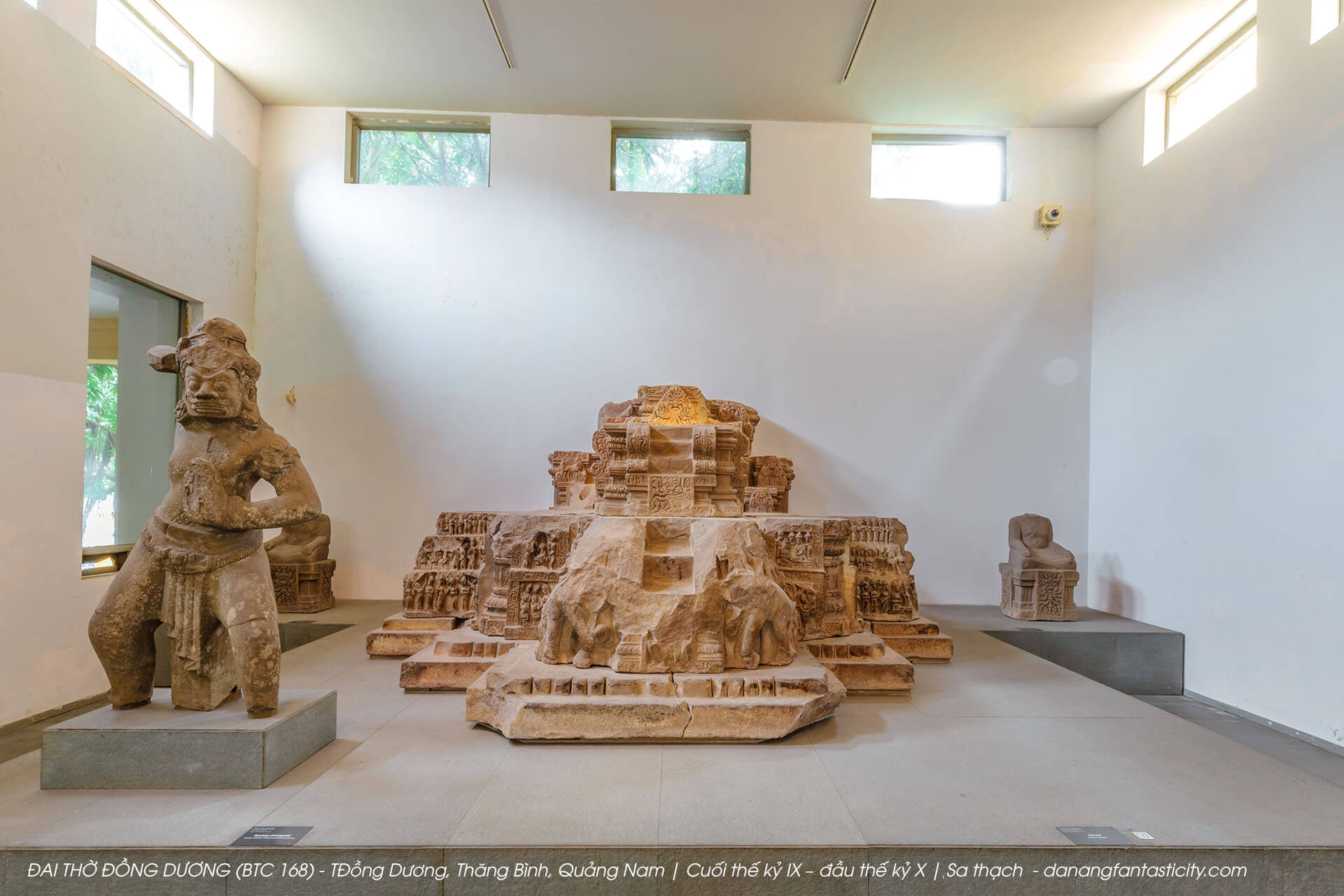 This altar was founded at the West main tower in which is considered to worship the Lakshmindra Lokeshvara – the god of the Buddhist Institute.

The altar consists of 24 stone blocks assembled together to create a monumental structure with four parts: the base placed at the bottom, the next is the large square ground altar; Above the large altar was a small, square altar and a taller altar pressed against the back of the large altar.

Regarding the description of the Altar, researchers up to now have stated different explanations:

In the first published document about this altar, Henri Parmentier described the shapes and postures of the characters carved on the hierarchy and on the decorative panels around the altar but did not indicate the significance of images and the Buddha’s legend. However, in the works on Champa art later, many researchers believed that scenes carved on the altar described the legend of Buddha Shakyamuni. As cited in the “La Statuaire du Champa” (The Champa sculptural art) by Jean Boisselier published in 1963, the photos of the altar were compared with the relief embossments found at Buddhist Monastery Borobudur (Indonesia) and it is claimed that the Champa artisans carved scenes on Dong Duong altar following the themes in sutras and stories of Buddha.

Jean Boisselier clarified that a few panels portrayed the scene of Queen Maya giving birth to Prince Siddhartha in Lumbini Garden, the scene of the Prince cutting his hair and changing his clothes, the scene of the servant Chandaka and the horse Kanthaka returned to the capital, Mara and his daughters disturbed the Buddha’s enlightenment. In the book Dong Duong Buddhist Institute published in 2015, the author Ngo Van Doanh also explained three sides of the altar representing three stages of Buddha’s life.

Dong Duong Altar (BTC 168) is an unique evidence proving a brilliant development period of the Champa Kingdom in the 9th – 10th centuries. This is the golden period in which Buddhism spread and became most prevalent in the Kingdom and marked a distinguished development era. The sculptural lines and decorative patterns on the altar are considered as one of the characteristic elements representing an important art style in the historical development of Champa sculpture. Hence, domestic and international researchers all agreed to name a separate art style – the Dong Duong style. This is vital evidence for the study of culture, belief, architecture and sculpture of this period in particular and the overall development of the Champa kingdom in general.

The altar was recognized as a National Treasure in December 2018.